skip to main | skip to sidebar

Where USF faculty, students and graduates are invited to talk about journalism and its problems and opportunities. This blog is not affiliated with the University of San Francisco, nor is the university responsible for any of the opinions expressed herein -- though it is certainly responsible for the people who entertain those opinions, having educated them. They make us proud. 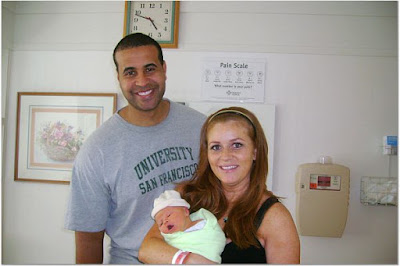 USF's own Fred Blankenship, now at WSB-TV in Atlanta, welcomes FB4. That's a nice baby. But Fred was always the West Coast distributor for handsome.
Posted by ....J.Michael Robertson at 8:39 AM 4 comments:

Maria Dinzeo Has a Big Story for the Bay Guardian, Where She Interns

The largest taxicab company in San Francisco is trying to squeeze more money from its drivers, who say they're already being hit hard by increased gate fees and rising fuel costs.

Yellow Cab has ordered its drivers to prepay for the privilege of driving each month, amounting to thousands of dollars for full-time drivers. Compounding that financial hardship is the apparent intention of the company to use prepaid gate fees to change the employment status of its drivers from employees to independent contractors who are no longer entitled to unemployment insurance and workers' compensation coverage.

While local officials say Yellow Cab's new policy is illegal, they have little power to compel the company to abandon the plan, which was supposed to go into effect Aug. 15 but has now been moved to December under pressure from city officials and the United Taxicab Workers union. Drivers are also threatening to bring legal action to stop Yellow Cab, relying on a past ruling barring the company from requiring deposits from its drivers and misclassifying drivers as independent contractors.

And here's the link. I bet Maria would respond to questions about this story if we asked her nicely.

This is our first step toward creating alum directory. Here it is.
Posted by ....J.Michael Robertson at 7:01 PM No comments:

Our Person in Italy

I just got back from Italy (the journalism program) and thought you might be interested in what we were doing over there. It was an awesome experience. We basically each created a web page complete with an article, photos and short video. It really taught all of the skills that seem to be important with the evolution of journalism lately. Mine was about the Slow Food movement with a video demonstrating a how to make pasta through a local woman.

Our Person in London

Chloe Schildhause writes from one of our many mother countries:

I am just emailing to update you on my internships and such as promised. RK Magazine is the site I interned with in the spring. If you come across articles written by Joey Rosseau that's me as well.

This summer I interned with Vogue.co.uk in London - here is a link to some little blurbs I wrote for the website -

Not much, but at least my name's on the page. It's silly, they had my write about makeup and perfume, neither of which I wear. Right now I am in London again interning with Dazed and Confused magazine.
Posted by ....J.Michael Robertson at 6:33 PM No comments:

According to Ad Age, the Google CEO is concerned about the unlikelihood newspaper investigative reporting will "monetize."
Posted by ....J.Michael Robertson at 5:16 PM No comments: